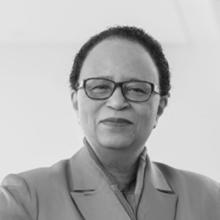 A theoretical physicist, Dr. Jackson has had a distinguished career that includes senior leadership positions in academia, government, industry, and research. She holds an S.B. in Physics, and a Ph.D. in Theoretical Elementary Particle Physics–both from MIT. She is the first African-American woman to receive a doctorate from MIT—in any field—and has been a trailblazer throughout her career, including as the first African-American woman to lead a top-ranked research university.