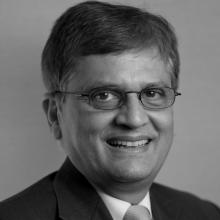 Prabhat Hajela, Ph.D., is the Provost at Rensselaer Polytechnic Institute in Troy, New York.  In this role, he is responsible for all academic portfolios at the Institute, and, in collaboration with the Vice President for Research, works to strengthen the research missions of the Institute. He also plays a significant role in fundraising and external relations.

Hajela has previously served as the Vice Provost & Dean of Undergraduate Education, where his broad administrative mandate included oversight of all undergraduate programs at the Institute, including engaging the five academic schools in program development and implementation. He also served as the Administrative Dean of the School of Humanities, Arts, and Social Sciences in 2010-2011, providing oversight to academic and research programs in the school during a period of transition. In 2003, he served as a Congressional Fellow responsible for Science and Technology Policy in the Office of US Senator Conrad Burns (R-MT). He worked on several legislative issues related to aerospace and telecommunications policy, including the development of the anti-SPAM legislation (CAN-SPAM) that was signed into law in December 2003. Hajela has been active in several national and international organizations. He is a past Vice-President of the International Society of Structural & Multidisciplinary Optimization. He has also a past Chair of ASME’s Aerospace Division. Hajela has served on different National Academies Panels related to Aerospace and Aviation research, including the first Decadal Survey of Aeronautics and a review of Aeronautics Research Programs at NASA, and is on the NRC Technical Assessment Board for the Army Research Laboratory. He Chairs the NRC Review Panel on Information Sciences research at the Army Research Laboratory. His research interests are in areas related to complex system analysis and design in the presence of uncertainties. He has conducted research at NASA’s Langley and Glenn Research Centers, and the Eglin Air Force Armament Laboratory. He also worked at the Boeing Company as the Boeing-A.D. Welliver Fellow in 1995. He has published over 275 papers and articles in the areas of structural and multidisciplinary optimization, and is an author/editor of 4 books in these areas. He has held editorial assignments and serves on the editorial boards of several international journals. In 2004, he was the recipient of AIAA’s Biennial Multidisciplinary Design Optimization Award. Hajela is a Fellow of the American Institute of Aeronautics and Astronautics (AIAA), a Fellow of American Society of Mechanical Engineers (ASME), and a Fellow of the Aeronautical Society of India (AeSI). Hajela received his undergraduate degree in Aeronautical Engineering (1977) from the Indian Institute of Technology, Kanpur. He received Masters degrees in Aerospace Engineering from Iowa State University (1979), in Mechanical Engineering from Stanford University (1981), a Ph.D. in Aeronautics and Astronautics from Stanford University (1982), and conducted postdoctoral research at UCLA (1982-83).
Back to top