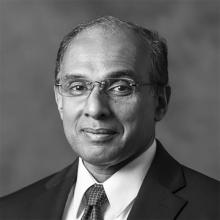 His research appears in journals such as Management Science, Operations Research, Mathematical Programming, Mathematics of Operations Research, Journal of Financial and Quantitative Analysis, Journal of Banking and Finance, and Quantitative Finance, among others. Emerald Management Reviews awarded the Citation of Excellence for his research in 2009, recognizing his work as one of the top 50 articles in management research in the world.   Edirisinghe was an Erskine Fellow at the College of Business and Economics at University of Canterbury in New Zealand, and, a visiting scholar at several universities. He served as the general chair of the 2016 INFORMS annual conference, which was attended by over 5,000 researchers. In July 2018, he chaired a panel discussion titled, “Potential for the Development of Fintech in Mauritius: Opportunities and Challenges,” in Mauritius, and, in July 2019, he served on the program committee for a panel titled, “Future of Financial Services: Deeper Digitization, Data-driven Decision Intelligence, and New Business Models,” held in Milan, Italy.
Back to top